A Church That Cares

Trinity Baptist is a growing, diverse group of Christians with a Pastor and Ministries committed to the growth and ministry of maturing Christians. Come and join us on our mission to compel the world to salvation and discipleship through Jesus Christ. 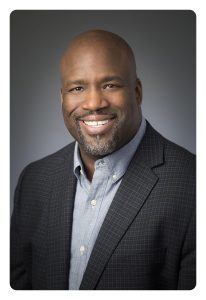 The Reverend Doctor Victor M. Davis has served as the Pastor of the Trinity Baptist Church, Columbus, Ohio for 25 years. Through his leadership as pastor, preacher, and teacher he leads the disciples of Trinity in proactive ministry that is committed to “Compelling the World to Salvation and Discipleship.” Under the visionary leadership of Pastor Davis, the church’s ministry is Christ centered and community focused. This is evident through several ministries and community partnerships that address the needs of those the church is called to serve locally and abroad. The church is presently in partnership with National Church Residences with plans to build “The Scarborough;” an 86-unit senior housing community. Trinity is a growing diverse ministry that is committed to the transformation and growth of Christians.

Dr. Davis earned the Bachelor of Arts and Master of Divinity, Magna cum Laude from Shaw University, Raleigh, North Carolina. He studied additionally at Southeastern Theological Baptist Seminary, Wake Forest, North Carolina. He earned and was conferred the Doctor of Ministry Degree from the United Theological Seminary, Dayton, Ohio. He has published articles and sermons. Prior to accepting the call to serve Trinity, he served as Pastor of the First Missionary Baptist Church, Smithfield, North Carolina. He is the son of the Rev. Roy and Mrs. Dorothy Birch, Jr., father of daughter, Adeyah (Ah-dee-yah) and son, Zion, and “Babu” (grandfather) of one granddaughter Khari (Khar-ree).

His leadership has afforded him the opportunity to serve as a member of several organizations and boards in the faith and civic communities. He is the past president of the National Association of E. E. Smith Senior High School Alumni and Friends, a member of the Morehouse College Martin Luther King, Jr. Board of Preachers, Atlanta, Georgia and a life member of both the Alpha Phi Alpha Fraternity, Inc. and the National Association for the Advancement of Colored People (NAACP). Dr. Davis also serves as a board member of the Columbus Zoo and Aquarium, the Affordable Housing Trust of Columbus and Franklin County and as a Chaplain with National Church Residences.

We believe in the authority of the scriptures as the true Word of God, written by men, under divine inspiration, and having God as the author and salvation as its end.

We believe there is one true and living God whose name is Jehovah and who exists in three persons: The Father, The Son, and The Holy Spirit.

We believe humankind was created in holiness but fell from that state by voluntary transgression.

We believe the way to salvation is grace through faith in the Son of God who, by his death and resurrection, paid in full for our sins and is now enthroned in Heaven as the only all-sufficient Savior.

We believe that the perfect righteousness of Jesus Christ is allocated to us through faith in Him and His blood.

We believe the Holy Spirit works within our lives to free us of sin.

We believe that to be saved, one must be born again through the power of the Holy Spirit. This is done by repenting for all sins first, then asking and accepting the Lord Jesus Christ into your heart and as your Savior.

We believe Christian baptism is the immersion of a believer in water in the name of the Father, The Son, and The Holy Spirit. This is the outward expression of the personal decision one has made to accept Jesus Christ as one’s Savior.

We believe communion is the sacred use of bread and wine as symbols of Christ’s broken body and His shed blood, taken by believers (as members of the Church), to commemorate the Lord’s Supper, and remember the suffering and death of Christ.

We believe the end of the world will come, Christ will return to earth, the dead will rise, and Christ will judge all. A separation will take place; the wicked will be condemned to Hell and the believers will ascend to Heaven.

Trinity Baptist Church, Columbus, Ohio began ministry with 50 members as the Evergreen Baptist Church on the corner of Naughten and 5th Street on May 5, 1924 . It was organized by the first pastor, Rev. L. G. Green. Shortly following formation, the church relocated to the old Liberty Theater located at 528 Saint Clair Ave. In 1925, the church’s name changed to Trinity Baptist Church and Rev. T. C. Phillips from North Carolina assumed the pastoral leadership until 1926.

In February 1927, Rev Dr. N. L. Scarborough from Winston Salem, NC and a graduate of Shaw University in Raleigh, NC accepted the pastorate of the church. He was recommended by Rev. T. C. Phillips. During his headship as preacher andpastor, the church grew rapidly.In 1933,when the theater was no longer conducive for worship, the church purchased the United Brethren Church located at 461 Saint Clair Ave and Atcheson Street. The purchase occurred in the mist of Great Depression. This was a great accomplishment for the church and the African American community as a whole. Trinity became a strong presence in the community, state, and nation. Dr. Scarborough was elected in March, 1937 as the Mayor of Bronzeville. During this time Bronzeville, that is now considered the Near Eastside of Columbus, was populated mostly by African Americans who were not represented in the downtown white political power structure. Dr. Scarborough represented the African Americans of Bronzeville speaking for social justice and civil rights. In addition to his civic activities Scarborough was active in the Baptist denominational witness. He served as President of the Lott Carey Foreign Missions Convention and in other capacities of leadership. In July 1949, while attending the Ohio Baptist General Convention in Dayton, OH, after over 20 years of pastoral leadership, the Rev. Dr. N. L. Scarborough died. The annex that was to be built, under the leadership of Pastor Parham, would be named the N. L. Scarborough Annex.

The Rev. Dr. E. A. Parham, a native of Como, NC, also a graduate of Shaw University in Raleigh, NC was called to be the supply (interim) pastor of the church in August of 1949 upon the recommendation of the Rev. Dr. Wendell C. Somerville, Executive Secretary Treasurer of the Lott Carey Foreign Missionary Baptist Convention, USA. In November of 1949, the church elected Rev. Parham to serve as pastor. For the next 47 years Pastor Parham would lead the congregation. The church building still located at 461 Saint Clair Avenue had many additions; the annex, chapel, third floor assembly room, classrooms, casket lift, elevatorand gym were built. The church was one of the first African American congregations in the city of Columbus, OH to have an 8:00 AM worship service. As with Scarborough the church continued to be a leader in the civic and faith communities. Dr. Parham served in the denominational work as President of Lott Carey Foreign Missionary Baptist Convention, USA, President of the Eastern Union Bible College, Dean of the Eastern Union Missionary Baptist Association and Ohio Baptist General Convention as well as the National Missionary Baptist Convention of America. He was advisor to the R. H. Boyd Publishing Company and founding president of the General Missionary Baptist Convention of Ohio. Pastor Parham officially retired August 1997. He was named the Pastor Emeritus and continued to work in the ministry of the churchin retirement, with his successor, Rev. Dr. Victor M. Davis through preaching as a staff minister for the prison ministry of the church.Pastor Parham was honored with the street to the south of the church building bearing his name; E. A. Parham Street and the renaming of the chapel to the E. A. Parham Chapel. The church also donated funds to institute the E. A. Parham Meditation Room, housed in the Thomas J. Boyd Chapel on the campus of Shaw University. Pastor Parham remained active in ministry until his death in December 2005. For over 60 years the beloved Pastor Parham and Trinity were in relationship.

In August of 1997, upon the endorsement of Pastor E. A. Parham, Rev. Dr. Victor M. Davis, a native of Fayetteville, NC and graduate of Shaw University in Raleigh, NC became the fifth Pastor of the Trinity Baptist Church. Under Dr. Davis’ preaching, teaching, pastorate and leadership the church continues to be in the forefront of missions, ministry and the community. Trinity’s doors remain welcoming to several community activities. The church has experience growth; purchased several properties, remodeled and updated the building and sanctuary several times, added personnel to the administration and ministry staff, operates the Rejoice Christian Bookstore, the Revival Development Cooperation, the Stratton House Food Pantry and Clothing Closet. In partnership with Second Baptist Church, Shiloh Baptist Church and the Alpha Rho Lambda Chapter of Alpha Phi Alpha Fraternity, Inc. “The Whitney’s” townhomes were built in the King Lincoln District of the near eastside of Columbus. Land was donated by the church to Habitat for Humanity for a family to build a home on Garfield Ave located in the same community of the church. Dr. Davis has served and continues to serve on several boards and organizations; the Affordable Housing Trust of Columbus, the Salvation Army, Homeport, the Columbus Urban League, the Eastern Union Missionary Baptist Association, Ohio Baptist General Convention, Lott Carey Foreign Missionary Convention, the Kingdom Association of Covenant Pastors, Coordinator of the Charles E Booth Preaching Conference, president and life member of the National Association of E. E. Smith Alumni and Friends and life member of the Alpha Phi Alpha Fraternity, Inc., the National Association for the Advancement of Colored People (NAACP). Pastor Davis is also a published author and was inducted into the Morehouse College of Martin Luther King, Jr. Board of Preachers. Under the visionary leadership of Pastor Davis the church’s ministry is Christ centered and community focused through several ministries. This is evident through a ministry and community partnerships that address the needs of those the church is called to serve.

Trinity Baptist Church continues to be a growing diverse ministry that is committed to the transformation and growth of people in the community locally and abroad. Trinity remains empowered by the Holy Spirit to compel the world to salvation and discipleship through Jesus Christ.

Get up-to-date news and information from Trinity right to your inbox.